This was a topic for discussion at the January meeting on Saturday. I had previously posted the following on the Skeptical Analysis blog, and I’m re-posting it here for NTS members. 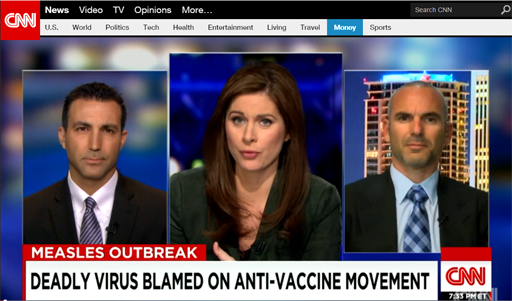 Thursday I caught a bit of Erin Burnett Outfront on CNN. She had an interview with Doctors Armand Dorian and Jack Wolfson. The conversation turned into a shouting match about the measles vaccine, or lack thereof.

Owing to a number of people declining to be vaccinated for measles there’s been a recent outbreak of measles, particularly in areas rich with anti-vaccine sentiment. See the map. 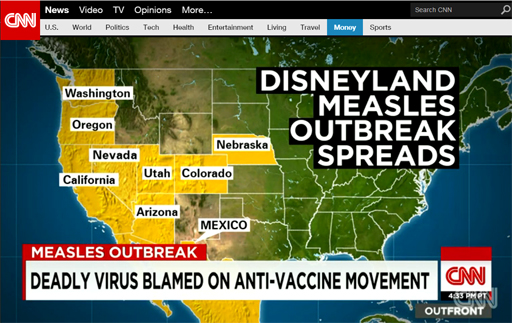 California is rife with vaccine craziness, which, unlike a lot of lame brain thinking, seems to cross liberal-conservative boundaries. Wolfson, out of Phoenix, Arizona, seems to be one of those who refuse to recognize the heavier benefit of vaccination. His attitude, at least in this sector, seems to be for letting nature run its course.

Dorian was aboard to counter a lot of Wolfson’s nonsense, but his wisdom generally got lost in the back and forth. I’m just going to highlight Wolfson’s comments, because stupid stuff is what this blog is all about. I transcribed the following from the video. There are likely mistakes in the transcription, but the gist is captured accurately. First, Burnett asks a question. Then, Wolfson responds. Burnett’s comments are in bold.

Why are you opposed to the vaccine?

He states that he is a board-certified cardiologist.

Whether it’s chicken pox, it’s measles, it’s mumps, rubella. Listen, there’s 70 people who have it right now. 80, whatever the number is. They’re not dying. These are benign childhood conditions that, once the child gets it, they will be immune forever.

You are artificially injecting chemicals to try and stimulate the immune system. That’s not the same thing. We all had chicken pox as children, and we’re all fine because of this. It is our right, and we’re not going to inject chemicals…

So, I’m thinking, “What do we need a doctor for?” You got a bad heart? Maybe it’s nature’s telling you that it’s time to die.

There’s obviously more to be said on this. Here’s something from the Washington Post:

It’s 6:30 p.m. in eastern Arizona, and an energetic doctor who has gained notice due to his disdain for vaccinations has just gotten home. It’s been a busy day. He’s already spoken to USA Today. He just did a segment on CNN. And he’s closely monitored his Facebook page, which has collected 4,000 “likes” in the span of 48 hours. But Jack Wolfson always has time to discuss vaccinations — his hatred of them and his abhorrence of the parents who defend them.

Not inclined to being mean-spirited, it is not my wish that Doctor Wolfson ever comes down with the measles.