Two summers ago I volunteered to review physics texts for the Texas Education Agency. The reviews were held in a large hall in a hotel in Austin, and other teams were reviewing other books. In particular I ran into a creationist I had met twenty years previous. He is Walter Bradley, and he was reviewing biology texts for the State of Texas. What I found odd about this was: 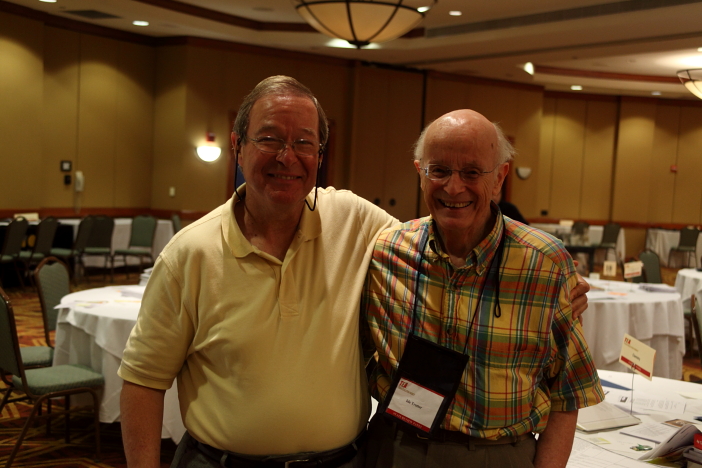 Wikipedia has this to say:

Bradley was one of the pioneers of the concept of intelligent design, attempting to explain topics not yet understood by science as the activity of God. Bradley’s writings on the subject anticipated some of the concepts later articulated by William Dembski and Michael Behe, and he was a participant in early meetings regarding the wedge strategy, a religious public relations campaign with a goal of reshaping American culture to adopt evangelical Protestant values.

I struck up a conversation with Dr. Bradley, and the topic naturally turned to Intelligent Design. What is pertinent to this is that Bradley posed this question to me: As new organisms develop by biological evolution, where does the new information come from?

I knew the answer to the question, but I did not press Dr. Bradley on it. I will give the answer now, and it is counter-intuitive. New information comes from completely random processes. I have highlighted that statement. Carry this forward to the discussion of observed evolution by random mutation and natural selection—Darwinian evolution.

Prior to the development of Nylon, there was no bacterium that could eat the substance. You have a fabric made of wool or cotton, and it is subject to attack by any number of bacterial agents. Not so with Nylon. Eventually a bacterium was discovered that could “eat” Nylon:

In 1975 a team of Japanese scientists discovered a strain of Flavobacterium, living in ponds containing waste water from a nylon factory, that was capable of digesting certain byproducts of nylon 6 manufacture, such as the linear dimer of 6-aminohexanoate. These substances are not known to have existed before the invention of nylon in 1935.

Further study revealed that the three enzymes the bacteria were using to digest the byproducts were significantly different from any other enzymes produced by other Flavobacterium strains (or, for that matter, any other bacteria), and not effective on any material other than the manmade nylon byproducts.

A random mutation had produced a bacterium that could eat Nylon. This was a new organism that filled a newly-created niche (Nylon) in the environment. This was Darwinian evolution in action. What do the creationist say in response?

Many supporters of evolutionary theory have claimed that nylon-eating bacteria strongly demonstrate the kind of evolution that can create new cellular structures, new cells, and new organisms.1 However, examining only the apparent, visible beneficial trait can be misleading. Recent research into the genes behind these traits indicates that no evolution has taken place.2In fact, the genes of nylon-eating bacteria show that they have been degraded through mutation.

The gene that mutated to enable bacteria to metabolize nylon is on a small loop of exchangeable DNA.3 This gene, prior to its mutation, coded for a protein called EII with a special ability to break down small, circularized proteins. Though synthetic, nylon is very protein-like because inventor Wallace Carothers modeled the original fiber based on known protein chemistry. Thus, after the mutation, the new EII protein was able to interact with both circular and straightened-out nylon. This is a clear example of a loss of specification of the original enzyme. It is like damaging the interior of a lock so that more and different keys can now unlock it.

This degeneration of a protein-eating protein required both the specially-shaped protein and the pre-existence of its gene. The degeneration of a gene, even when it provides a new benefit to the bacteria, does not explain the origin of that gene. One cannot build a lock by damaging pre-existing locks. Nylon-eating bacteria actually exemplify microevolution (adaptation), not macroevolution. Science continues to reveal, though, how benevolent is our Creator God, who permits bacteria to benefit from degradation, and man also to benefit from bacteria that can recycle synthetic waste back into the environment.

The three references cited are listed below:

The author of this is “Brian Thomas, M.S.”

Brian Thomas received his bachelor’s degree in biology in 1993 and a master’s in biotechnology in 1999 from Stephen F. Austin State University, Nacogdoches, Texas. He taught junior high and high school at Christian schools in Texas, as well as biology, chemistry, and anatomy as an adjunct and assistant professor at Dallas-area universities. Since 2008 Mr. Thomas has been a science writer and editor at ICR, where he contributes news and magazine articles, speaks on creation issues, and researches original tissue fossils. He is the author ofDinosaurs and the Bibleand a contributor to Guide to Creation Basics,Creation Basics & Beyond, and Guide to Dinosaurs.

Interesting points of his argument are:

3. The “lock” mentioned here is an analogy. A mechanical lock is a device that is used by people, and Thomas is reminding us that a lock that is damaged, such as by putting a .357 Magnum slug through it, does not produce a useful mechanism. The problem with this argument is this is not a lock mechanism built by people. This is a gene that expresses the production of a protein (or an RNA sequence), and it has been altered, and the altered form produces a result that allows the bacterium to digest Nylon.

4. Yes, this is micro evolution. What did Thomas think this was all about? Just about all gene mutations produce micro changes in the offspring. Darwinian evolution, including the the formation of new species, is the accumulation of micro-changes.

5. I am going to let Brian Thomas have this point. I mean, if it’s God doing all of this, then who am I to dispute it?

Back to Walter Bradley’s challenge. New information does come from random processes. People who employ genetic algorithms to develop improved systems (e.g., Diesel engines) use random processes to inject variation into trial designs. It works in modern industry. It works in nature.